Making any career change is tough – Leaving the corporate safety net to take the leap into the entrepreneurial wilderness makes you define what it is to be busy and what hard work actually is.

Former banker Kris Ingham discovered the health benefits of amino acids while he was at University over 10 years ago. After some years of researching and developing his business plan, Kris made a major career decision to quit his banking job and launch his own healthy drink business in 2015.  He explains what it is like to transition from the corporate sector to entrepreneurship.

“Whilst others may regard survival as a success, we’ve experienced 1,200% growth in 2018 vs 2017 and it’s been far from a straightforward journey so let me start from the beginning.

The concept for Rejuvenation Water started a long time before we launched to market.

It was at University, 10 years before we launched, that I first discovered the functional health benefits of Amino Acids.

At the time, Vitamin Water with single vitamins and high sugar represented innovation in the drinks market and had just sold for $4.2bn to Coca-Cola.

The question I asked then was – why aren’t Amino Acids, with their benefits going to a cellular level, a mass-market product?

I wasn’t given a credible answer.

There wasn’t such a thing as an internship 10 years ago and, having completed an Economics degree, the natural transition was into Banking.

Having secured a position at Nationwide Building Society, based in Northampton, I set off on a career in Banking.

Following 6 years at Nationwide, I moved to London with a role at Itau – a large Brazilian bank.

With the level of market regulation for a Trader, I lost my ability to express myself entrepreneurially and so, I set about writing a business plan in quiet periods.

Finally, in March 2015, with my savings, I took the plunge and hired a consultancy to produce three products, ingredient lists and find a contract packer to produce the drink.

It took 6 months to put everything together and, by September 2015, we were ready to soft launch at the Lunch Expo 2015, in Islington. 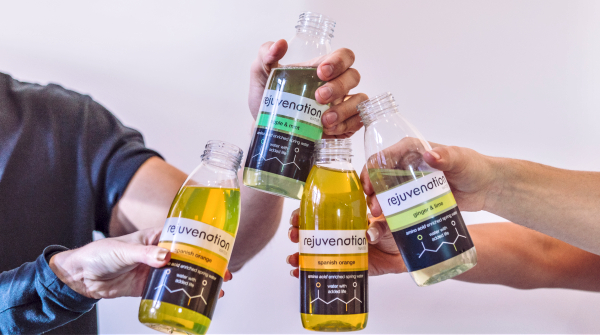 I took 2 days off from work and, with the help of my brother, a wallpaper table, a bed sheet and three Kilner jars, I launched Rejuvenation Water.

Across the 2 days, we sold over 2,000 bottles, agreed to launch with two distributors and had interest from the likes of Waitrose, Boots, Holland & Barrett and WH Smith.

Within 6 weeks, I quit my banking job and I launched the brand to market in early 2016.

The transition from Banking to FMCG wasn’t easy – Firstly, I knew nothing about the market, I didn’t understand all their acronyms and the only contacts I had was those from the initial trade show.

My first hire was, therefore, a non-executive director whose role was to guide me through the initial pitfalls, provide introductions and translate the FMCG spiel into English.

This was vital as any commercials agreed, at this time, could stand for the life of the business.

It has been a bumpy ride over almost 3 years since I quit my Banking job but, now, with listings in the likes of Waitrose, Morrisons, Ocado, Costco, and Holland & Barrett, and having raised over £400k in funding, we are one of the fastest-growing FMCG brands in the UK.

I was little overwhelmed to find that what I’ve achieved with Rejuvenation Water hadn’t gone unnoticed especially with being shortlisted for the New Entrepreneur of the Year award by the National Business Awards.

My advice, for people looking to make a similar transition, is that entrepreneurship is a lonely experience.

Surround yourself with people who know more than you, whether they are mentors or non-executive directors.

Also, from the outset, define what you want to achieve from the business.

If it’s for national and international expansion, ensure your business model has the foundations to scale and that it has the access to the resources that you will require to do so.”

#Throwback – The launch of #mystartupstoryuk on June 13…

Creative Entrepreneurs: Apply For WeWork Creator Awards 2018 And Win Up To £280K

To my fellow and aspiring young female entrepreneurs – I sometimes think that the closest feeling that you could possibly equate to starting your business is the same as if you were having a baby. No, I’ve never had a child, I’m still far too young. However, I have experienced the labour pains, the unconditional […] 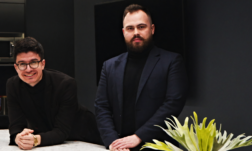 The recent decision to use an algorithm to decide A-level results has put the use of advanced algorithms, underpinned by artificial intelligence (AI) technologies into the spotlight. What made this situation so unique is that it was also one of the first examples of an algorithm being relied on to make far-reaching decisions on a […] 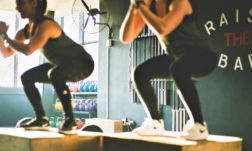 7 Important Lessons To Learn From Running A Health Tech Startup

Running a health tech startup is hard work but can be highly rewarding – not to mention a lot of fun.  This article is based on my experience of co-founding DocTap GP Clinic, a provider of affordable, short notice GP appointments to people in London. We certainly didn’t get everything right the first time, but for […]